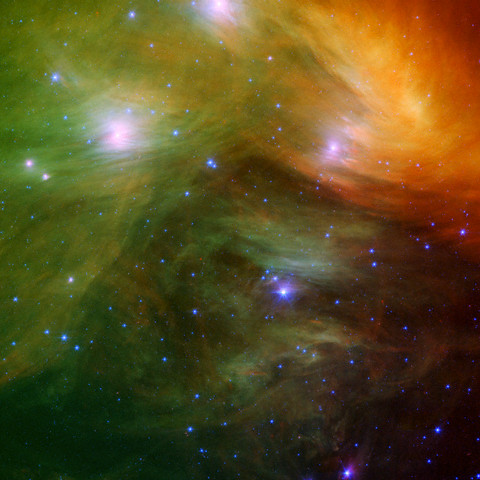 12 Apr 2007 — The Seven Sisters, also known as the Pleiades, seem to float on a bed of feathers in a new infrared image from NASA’s Spitzer Space Telescope. Clouds of dust sweep around the stars, swaddling them in a cushiony veil. The Pleiades, located more than 400 light-years away in the Taurus constellation, are the subject of many legends and writings. Greek mythology holds that the flock of stars was transformed into celestial doves by Zeus to save them from a pursuant Orion. The 19th-century poet Alfred Lord Tennyson described them as “glittering like a swarm of fireflies tangled in a silver braid.” The star cluster was born when dinosaurs still roamed the Earth, about one hundred million years ago. It is significantly younger than our 5-billion-year-old sun. The brightest members of the cluster, also the highest-mass stars, are known in Greek mythology as two pare. — Image by © NASA/JPL-Caltech/Corbis

Warning: Use of undefined constant z - assumed 'z' (this will throw an Error in a future version of PHP) in /home/comets5/oceanbreezetherapy.com/wp-content/plugins/simple-daily-quotes/SimpleDailyQuotes.php on line 847